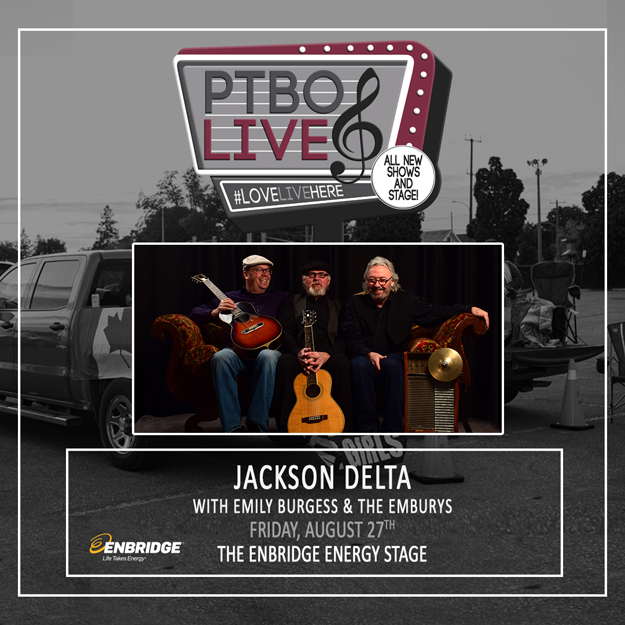 The PTBOLive Summer Concert Series is excited to announce an all-local musical showcase on the Enbridge Energy Stage featuring Jackson Delta and Emily Burgess & The Emburys. This amazing night of music happens August 27 at the Peterborough Memorial Centre. Jackson Delta are a Canadian Acoustic Blues Trio out of Peterborough, ON, Canada. Twice Juno-nominated for Best Roots and Traditional Album – 1990 for Acoustic Blues, 1991 for I Was Just Thinking That. Band members are Alan Black - vocals, harmonica and drums, Rick Fines – vocals and guitars, Gary Peeples – vocals and guitars. The band was founded in the 80s in Peterborough and they remain a perennial hometown favourite, playing an annual show at the Market Hall. Jackson Delta always brings a spirited, toe-tapping good time and looks forward to playing for their home town. Emily Burgess & The Emburys were named ‘Best New Group’ at The Maple Blues Awards in 2019. At the heart of this Peterborough, Ontario trio is creative songwriting, harmonies, and a group sound that is as dynamic as it is inventive. Emily Burgess (guitar/vocals), and Marcus Browne (drums/vocals) have steered the ship of this mighty little group since 2017, with Dawson McManus joining on bass in 2019. In very short order, the band has travelled every direction, criss-crossing the continent from Electric City, WA to Hubbards, NS, from Thunder Bay, ON to Atlanta, GA, wowing audiences with their big sound and unassuming nature. The trio is guided, influenced, and inspired by renowned American/Canadian rockers, The Weber Brothers, who produced Burgess’ first album ‘Are We in Love?’.

Presale for PMCScoop members is Wednesday May 5th at 10AM to Thursday May 6th at 10PM, online only. Tickets go on sale Friday May 7th at 10AM  online or over the phone at 705-743-3561 Fans are encouraged to get their tickets early as space is limited! Front Row: $125.00* General Admission 1: $100.00* General Admission 2: $100.00* *Prices are per vehicle. All ticket prices are subjet to applicable fees and taxes. Prices are subject to change.