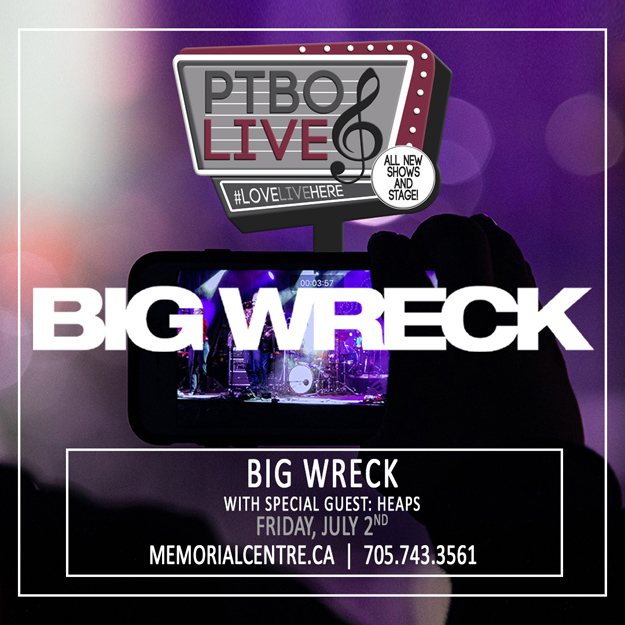 The PTBOLive Summer Concert Series is excited to announce Canadian rockers Big Wreck will be performing live on the Enbridge Energy Stage at the Peterborough Memorial Centre for a special Friday night drive-in concert. Joining them will be special guests HEAPS.  Formed in in the mid-‘90s, Big Wreck remains one of the highest regarded rock bands in Canada, and music fans around the world know them as one of the most prolific groups on earth. The band remains a constant at rock radio, and each new release is further proof that Big Wreck’s music continues to evolve, while remaining accessible to the ‘every fan’. A dive into Big Wreck’s catalogue brings you on a journey of musical tastes. Fans of straight up rock will lean into tracks like the #1 Hit, “Albatross", “The Oaf”, and “That Song”, and guitar driven purists can find refuge in deep cuts like The Arborist, Control, and Skybunk Marche. There is a new energy in Big Wreck that hasn’t been seen before, and with new music on the horizon, the band is set to embark on the biggest chapter of their career. Heaps are a collective of creators hailing from the Kawartha Lakes in Ontario, Canada. Heaps bring droney, ethereal, punchy art-rock and they write about time, change and privilege. Heaps, in another melodic lifetime, were known as The Kents. In that collective, they were featured in on Hockey Night In Canada, MLB's World Series, 2018 PyeongChang Olympics, Canada’s Walk Of Fame Emerging Artist and earned radio support from CBC, including George Stroumboulopoulos. Their final release Within Waves elevated them beyond 5-million Spotify streams.