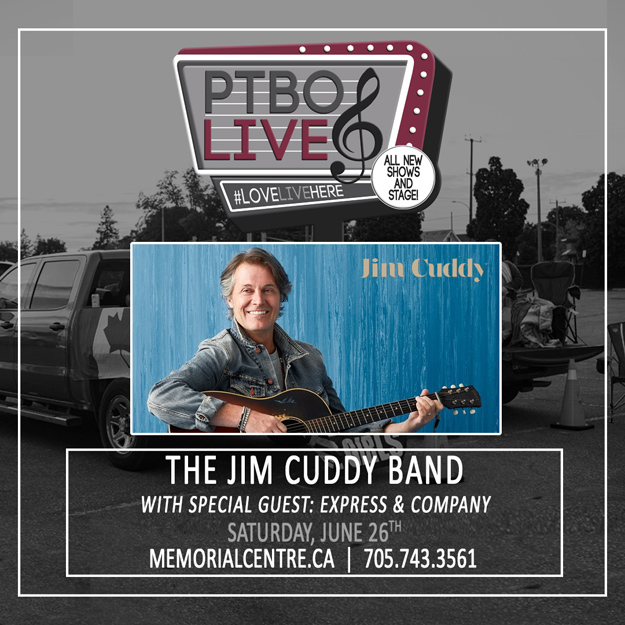 The PTBOLive Summer Concert Series is excited to announce legendary Canadian musician Jim Cuddy brings The Jim Cuddy Band to the Enbridge Energy Stage at the Peterborough Memorial Centre for an unforgettable Drive In concert experience. Also performing on stage that night is special guests Express & Company.  As one half of one of Blue Rodeo’s songwriting partnership, Jim Cuddy has one of the most recognizable voices in Canadian music thanks to omnipresent hits such as “Try,” “5 Days In May,” and “Bad Timing.”  As a group Blue Rodeo has sold over 5 million records world-wide, won countless JUNO Awards, been inducted in to the Canadian Music Hall of Fame, received a star on Canada’s Walk of Fame and Jim (along with songwriting partner Greg Keelor) was invested as Officers of the Order of Canada. The Express and Company is a folk and roots band from right here in Peterborough, Ontario. The band is fronted by Dylan Ireland, formerly of The Ireland Brothers. But after that band stopped playing together in 2010, Ireland started writing his own music. He teamed up with his partner, fiddler Melissa Payne, and a group of wonderful local musicians, and The Express and Company was born. Since then, the band has been on an impressive rise. They’ve toured Canada travelling as far afield as the Yukon, they’ve appeared at South By Southwest and the Mariposa Folk Festival, and, most recently, they’ve reached the number one spot on the the R3-30, CBC Radio 3’s nation-wide indie music countdown, for the song “Carry Me Along” off Ontario. Ontario is the band’s first full-length album, consisting of nine tracks about friends, family, love, travel, and the band’s home province.