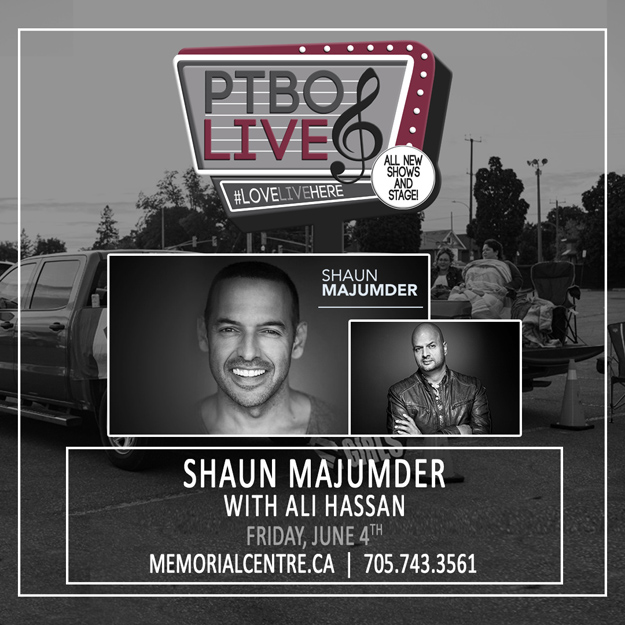 The PTBOLive Summer Concert Series is excited to announce Canadian superstar comedian Shaun Majumder live on the Enbridge Energy Stage at the PMC. Joining Shaun on-stage will be another huge Canadian comedian Ali Hassan. Join these two amazing talents for an evening full of laughs.  Shaun Majumder is an actor, writer, comedian, and social entrepreneur from the small town of Burlington, Newfoundland and Labrador, Canada. If you are a Canadian millennial reading this, he was that guy on YTV for years. “Brainwash”? Remember? Or how about Uh Oh!? That crazy game show. He was Slime Master Shaun. Yip, that was him. He starred in shows like “Cedric The Entertainer Presents” on Fox, The Farrelly Brother’s Comedy “Unhitched,” NBC’s “The Firm,” and ABC’s critically acclaimed “Detroit 187.” He was also Kumar’s brother in the first “Harold and Kumar Go to White Castle.” Other credits include CTV’s “Robson Arms,” “Less Than Kind,” “The Ladies Man,” TNT’s “Breed,” CBC’s “Hatching, Matching and Dispatching,” “Republic of Doyle,” and in Season 6 of “24,” he blew up Los Angeles. Shaun spent 17 years as one of the stars of CBC’s “This Hour Has 22 Minutes,” leaving the show in 2018. Ali Hassan is a stand-up comic and actor who has performed for audiences across Canada and internationally. He is the host of CBC Radio's LAUGH OUT LOUD and a five-time host of CANADA READS. He is also a frequent guest-host of CBC Radio’s q and AS IT HAPPENS. A Canadian Comedy Award nominee, Ali has performed at the Just For Laughs Festival in Montreal, Toronto's JFL42 and the Winnipeg Comedy Festival, in a set that aired on CBC TV. He has toured his solo show Muslim Interrupted around Canada to great acclaim, and in fall 2019, he starred in Just For Laughs Comedy Night In Canada tour, hosted By Rick Mercer. Ali has appeared in award-winning films and television roles. In 2020 he was seen in the films My Spy, Mafia Inc. and Tammy's Always Dying, which had its world premiere at TIFF2019.